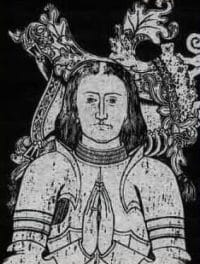 Edmund Tudor was born in Much Hadam in 1430 to Owen Tudor and Catherine of Valois. A half-brother to King Henry VI, he was knighted by King Henry VI in 1449 and elevated to the peerage as Earl of Richmond in 1452/3. Edmund married Lady Margaret Beaufort in 1455, who bore the couple a child, Henry Tudor [King Henry VII] after the death from the plague of Edmund.

Edmund’s infancy was spent with his parents at Much Hadam, a manor owned by the Bishop of London that Catherine of Valois had been allowed to reside in. Following his mothers death in 1437 his father was imprisoned. At this point the wardship of Edmund and his brother Jasper, was placed into the hands of Catherine de la Pole, abbess at Barking.

In 1440 King Henry VI was made aware of his half-brothers situation. He brought Edmund and jasper to court and provided priests for the purpose of their education. As Edmund and Jasper entered their twenties, the brothers were raised to the Peerage. Having been knighted in 1449, Edmund was now created Earl of Richmond and called to Parliament in 1452/3. That Parliament recognised Edmund and Jasper as being legitimate, and their brother made land grants to both of his half-brothers which made them powerful men.

In 1455 Edmund was married to lady Margaret Beaufort. Margaret was an incredibly wealthy heiress of Lancastrian blood, which would provide status, wealth, and political power to Edmund. Despite Margaret Beaufort’s tender age, she was soon pregnant. Her pregnancy coincided with the outbreak of hostilities between nobles loyal to the Royal Household and the supporters of the Duke of York. Edmund Tudor had responsibilities for ensuring the King’s rule in Wales, and the troubles saw the need to tackle a rebellion that had been launched alongside a eisteddfod organised by Gruffudd ap Nicolas.

The rebels had captured a series of Castles in South Wales, seeing Edmund lead a campaign to retake castles at  Aberystwyth, Carmarthen and Carreg Cennen. At Carmathen, Edmund Tudor’s men were successful in taking the castle but soon found themselves facing an altogether more difficult situation. The rebels had been dealt with relatively swiftly, now, with the noble lords of England and Wales in open conflict, he faced an army of around two thousand men under the command of William Herbert.

Herbert had been sent into wales on the orders of Richard Duke of York, with an aim of capturing South Wales and securing it should the conflict be a prolonged one. Edmund Tudor was captured as Herbert’s men seized Carmarthen Castle. As a blood relative of King Henry VI, Edmund was a prized prisoner who would not be released until the Yorkists were satisfied that political matters were settled in their favour. In his confinement in Carmarthen Castle, Edmund is said to have contracted the Bubonic Plague, of which he died in November 1456.

At the time of Edmund’s death his wife, Margaret Beaufort, was seven months pregnant. Aged just 13, she was taken into the care of Jasper Tudor until she and the baby Henry Tudor could be provided for through other means.

Edmund Tudor, biography from the Dictionary of National Biography

Note: the Dictionary of National Biography is Public Domain in the United Kingdom. A more recent version is available that takes into account research from the past hundred years. It can be found here.

TUDOR, EDMUND, Earl of Richmond, known as Edmund of Hadham (1430?–1456), father of Henry VII, eldest son of Owen Tudor [q. v.] by Henry V’s widow, Catherine of Valois [q. v.] was born about 1430 at Hadham, Hertfordshire. Doubt attaches to the marriage of his parents. Jasper Tudor [q. v.] was a younger brother. When his mother retired to the abbey of Bermondsey in 1436, Edmund and his brothers were given into the charge of Catherine de la Pole, abbess of Barking. There they remained till 1440, when the abbess brought them to Henry VI’s notice, and he gave them in charge of certain priests to be educated. When Edmund grew up Henry kept him at his court. He was knighted by Henry on 15 Dec. 1449, summoned to parliament as Earl of Richmond on 30 Jan. 1452–1453, and created Earl of Richmond and premier earl on 6 March 1452–3 (Doyle; Ramsay, Lanc. and York, ii. 152). In the parliament of 1453 he was formally declared legitimate. Henry made him large grants, particularly in 1454, and his name occurs as being exempt from the operation of acts of resumption. On 30 March 1453 he was appointed great forester of Braydon forest; he was also a member of the privy council. In 1454 his retinue at court consisted of a chaplain, two esquires, two yeomen, and two chamberlains.

In 1455, by the king’s agency, he was married to the Lady Margaret Beaufort [q. v.] daughter of John Beaufort, duke of Somerset. She had been after Somerset’s fall the ward of himself and his brother Jasper conjointly. Edmund died, on 3 Nov. 1456, at Carmarthen, and was buried in the Grey Friars there. His elegy was written by Lewis Glyn Cothi [see Lewis]. His remains were, at the dissolution of the monasteries in 1536, removed to the choir of St. David’s Cathedral. By Margaret, his wife, he had one son Henry, afterwards Henry VII of England, born posthumously on 28 Jan. 1456–7.