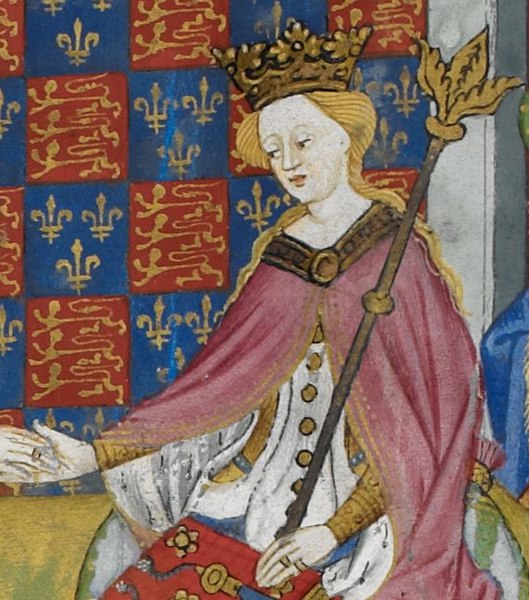 King Henry VI’s marriage to Margaret of Anjou was arranged by the Duke of Suffolk as part of a peace treaty with France. Once the marriage had been agreed upon, Margaret was escorted in pomp and ceremony from Anjou to Rouen. Here she met the Duke of York, then Lieutenant of France. From Rouen she made her way to the coast and sailed from Normandy to England, landing at Porchester Castle.

Margaret was then taken to meet King Henry. The couple were then married at Titchfield Abbey in a service that was rather quiet by royal standards.

Following their marriage at Titchfield Abbey Margaret made her way to London. Along the route were pageants in her honour, celebrating her as a peacemaker with symbols of doves. Like most royal coronations hers was a lavish affair. In London, the conduits flowed with wine and crowds lined the streets. Her arrival at the City was on a chariot, followed by unnamed ladies in additional chariots. Henry, despite the financial troubles of the time, ensured that she was provided for in a manner fitting her position at his side:

“The Queene most necessaryly have for the Solempnitee of hir Coronation . . . a Pusan of Golde, called Ilkyngton Coler, Garnished with iv Rubees, iv greet Sapphurs, xxxii greet Perles, and liii other Perles. And also a Pectoral of Golde Garnished with Rubees, Perles, and Diamonds, and also with a greet Owche Garnished with Diamondes, Rubees, and Perles, sometyme bought of a Marchant of Couleyn for the Price of Two Thousand Marc.” Order made by Henry VI

Find out more and find daily narratives in On this day in The Wars of the Roses.
http://mybook.to/WarsoftheRoses